One thousand years ago, our early-medieval family lives on a small farmstead named Tyddyn Ystradfflyr (Welsh for “Bloomingdale Farm” or “Flowering-valley Homestead”), just across the Conwy river from the town of Llanrwst.

Here’s a modern view of the area taken from Google Maps: 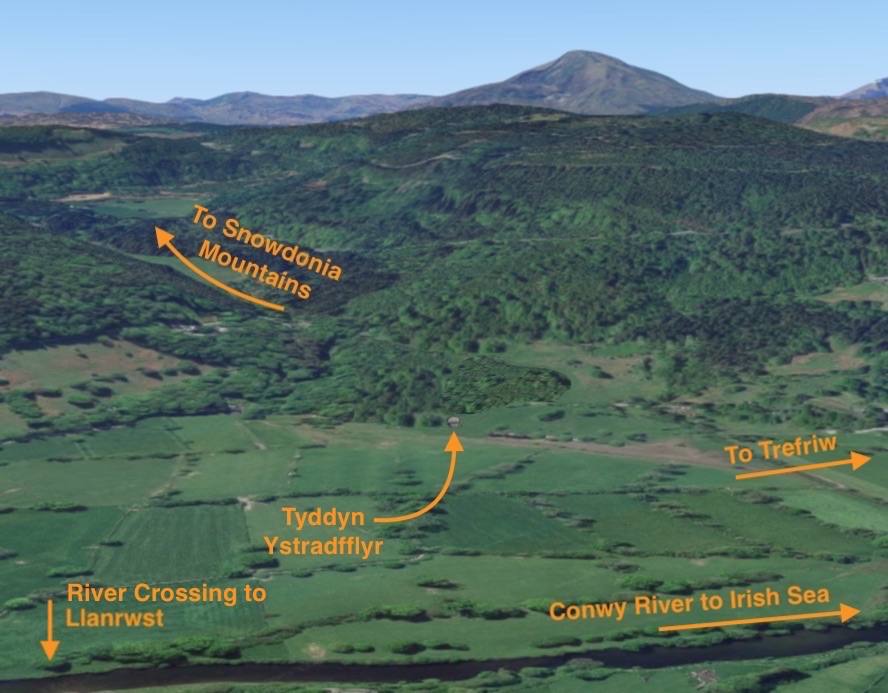 The site enjoys fertile river-valley farmland, and easy access to the Gwydir Forest, which covers the foothills of the Snowdonia mountains. A small stream, the Nant Gwydir, flows down from the mountains, through the forest, and down to the Conwy; we maintain simple irrigation channels to divert some of its flow to support our crops.

In the eleventh century, the Conwy river is navigable up to the point of Llanrwst, where a small set of rapids obstructs further passage, making this an important market town where wool and other products from the region are sold and loaded on to ships for export. (By 1521 the Conwy has silted up and ocean-going ships can no longer reach Llandrwst, stopping instead at Trefriw a mile downriver.)

The Conwy river does flood seasonally, but at other times it is low enough that people can wade across it, and livestock can be herded across without ferrying them back and forth in our little rowboat.

It’s a ten or fifteen minute walk from our house down to the ford where you can cross the river to the bustling town of Llanrwst, named after its founder, Saint Grwst. We sell some of our farm’s crops at the market, as well as the handcrafts that Alienor makes during the long winter evenings.

We raise goats and pigs, and have one ox which we use to plow our fields for oats and barley. The vegetable patch close to our farmhouse provides peas, leeks, and other greens to round out our meals.

Given the traditional land-ownership practices of this region, much of the area we farm does not belong to us directly and exclusively, but is held in common by the community or rented from a wealthy absentee landlord. This social compact allows us to till some patches of nearby land, graze our livestock along the hillside, and harvest lumber from the forest despite not having independent title to those lands — or at least it does as long as we avoid conflict with our neighbors and are not overly late in fulfillment of our rents.